<< BACK
NEXT >>
Once we’ve set up our Facebook Page, there are three things we need to do: Post some content, find our first few fans, and engage them so that they Like our Page and interact with it. 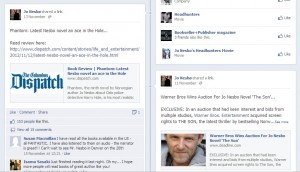 An example of a Page timeline. (Click to enlarge image.)

Your Facebook Page has a timeline, just like your personal Facebook Profile. A Page timeline is two columns wide, unlike a personal Profile timeline which is a single column.

The timeline is where you add the short posts, photos or videos, links and so on, and where your fans can interact by commenting and sharing. Posts to your timeline appear in the news feeds of fans who Like your Page.

You add short posts using what Facebook calls the sharing tool. In a later section, we’ll give you some tips on the most effective ways to post.

Get started by adding some content that you think your target audience will like and that will give them a flavor of what your Page will offer them.

Once you’ve set up your Page, the trick is to get Facebook users to Like your Page. This lets them follow your Page and means your updates and posts will get wider coverage by infiltrating the timelines of your fans (those who’ve clicked the Like button on your Page) and their friend networks.

One thing to keep in mind is that once you’ve attracted 25 fans, you can register a custom username for your Facebook Page. This gives you an easy-to-remember (and potentially more search engine friendly) name in the format facebook.com/MyName, unlike the ugly and difficult-to-remember URL you’re assigned when you first set up your page. You might want to apply for this name before you start printing your Facebook address on any marketing materials.

A Facebook gotcha. In theory, when you post an update on your Facebook Page, fans who Like your Page will also see it in their personal timelines. After all, that’s what you and your fans are signing up for, right? Wrong. In fact, Facebook’s EdgeRank algorithm filters all the updates flowing into a user’s timeline so that, on average, only about 1 in 10 updates gets through. There are things you can do to improve this but if you want to make sure all your fans get a message, your only option is to use Facebook advertising.

Note however that, under pressure from users and Page owners, Facebook quietly released a feature that gives fans some control of Pages they want to see unfiltered. When they visit a Page they follow and click the ‘Liked’ button, they can select the Get Notifications option. But Page owners have no control over this and you’ll probably violate Facebook policies if you actively try to get your fans to do this.

‘Engagement‘ is Facebook’s jargon for getting fans interested enough to interact with and share your Page’s posts. Writing good copy should be easy for literary types but Facebook thrives on a different style and it has different objectives.

Here are the top three things you can do to write copy that will engage your fans.

Caution: Facebook recently announced that it was tweaking its algorithm to penalise posts that explicitly ask users to like, post, share, etc. Its aim is to remove the “spammy” posts but you should take care how you use this time-honored practice and be a little creative and subtle about how you ask fans to engage with your posts.

Most successful posts follow one or more of these rules but there are plenty of other things that work. We’ve listed a few of the perennials below. 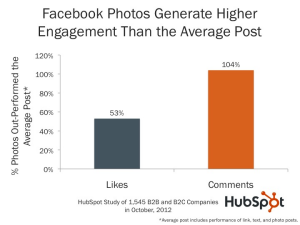 One of the simplest and best ways to boost engagement is by using photos. Posts with photos outperform the average by more than 50% in likes and comments.

Studies have shown a boost in engagement of 20% from posting outside of normal business hours, so vary your posting times. You can schedule posts to appear later. Click the clock icon in the lower left of the sharing tool, or use a social media ‘dashboard’ like HootSuite.

A well-designed contest is one of the best ways to boost the number of fans and fan engagement. There are two types: Sweepstakes where prizes are won by chance, and contests or competitions where prizes are awarded based on skill or judging criteria. Facebook has tight rules around competitions and and monitors them closely (check their Promotions Guidelines).  One rule is that you must use a third party app to run a contest. Examples are Wildfire and Woobox. We’ll look at apps shortly.

A couple of tips:

An example of this was a competition that Amazon ran in late 2011 (when its fan count was just 10% of the figure a year later). The prizes were Kindles (so were relevant to the sorts of fans it wanted to attract), but it had a nice twist: In entering the sweepstakes, you nominated three Facebook friends who would also get a Kindle if you won. The results boosted Amazon’s fan count by more than 400,000 in a month (at a time when its total fan count was just 1.6 million).

Yes, if it’s amusing it’s more likely to be enjoyed and shared. If you’ve got a talent for it, lighten up occasionally.

Get (a little) personal

While you’ll want to avoid over-sharing, personality works, and little bit about the people behind your business or Page can be appreciated by fans. Like humor, use it wisely and well.

Facebook provides several ways to highlight particular posts on the Page’s timeline so that they stand out — pinning, highlighting, milestones, etc. We’ll look at these shortly.

When you pay to promote a post, Facebook will ensure it gets a prominent position in your fans’ timelines, and reaches more of them. While it might seem slightly seedy, especially as Facebook’s own Edgerank algorithm blocks most of your posts from fans’ timelines, it unquestionably will improve engagement and reach.

The answer, of course, is often but not too often? And be consistent. What’s often enough? For most active Pages, there’s going to be daily activity but that doesn’t have to produce a flood of posts. One or two a day will probably be fine.

Amazon added more than 10 million new fans in 2012, posting just once or twice a day or so through much of that period. It posts more often now as its fan count has grown, but that still means just half a dozen new posts a day, sometimes fewer.

How engagement affects the reach of your posts

Engagement is valuable for more than just feeling good. The amount and the types of engagement feed into Facebook’s EdgeRank algorithm, heavily influencing how many fans — and friends of fans — your posts reach. This is appropriately referred to as the reach of a post.

Reach is a ‘holy grail’ of Facebook posting. Facebook defines it as the number of people — fans and friends of fans — who see your post over a 28-day period. Done well, you can reach many more fans than actually Like your Page.

More engagement = more reach. If a post has a high proportion of engaged fans, it’s more likely to appear in others’ timelines.

By the way, this is a reason to be wary of filling your Facebook Page with marginal fans who have little interest in you. They’ll reduce the percentage of engaged fans and risk lowering your reach.

Next: Stepping it up

That’s the basics. Now we’re ready to give our Page more impact, step up our promotion, and start to make Facebook work for us.