<< BACK
NEXT >>
Social networks offer a range of advertising options that can greatly boost the value of your social media platform, offering ways to promote to your followers and reach beyond your own networks. We look at how social advertising works, how to buy it, and how to measure its performance.

In spite of this, advertising on social media sites such as Facebook, Twitter and LinkedIn remains a controversial area for both advertisers and users.

Social network advertising faces a particular problem in being seen as intrusive by users, and efforts to minimize this often result in forms of advertising that are less effective for advertisers.

Let’s look first at Facebook advertising in more detail. It’s the most-developed advertising platform among the social media and reaches the largest audience.

Facebook offers a number of advertising options and not all of them depend on you having an active Facebook Page. And unlike Google’s AdWords search advertising, you don’t have to target based on keywords.

Facebook lets you pick who your ads will be shown to based on criteria such as demographics, interests, region, users’ activity on other sites (yes, you’re tracked as you surf the internet), and will even let you show different ads to people on your own mailing lists from those shown other Facebook users.

If you have a Facebook business page, you can run advertising in using the “promoted post” style in which you pay to get your post seen by a larger pool of Facebook users. Or you can run display ads that can be set to appear to Facebook users who meet various criteria that you set.

Advertisers can pay to highlight posts or other activities from the news feed, such as Likes, comments, or event attendance.

The sponsored posts appear as Facebook ads, or as ‘featured’ stories in the user’s news feed. Ironically, this is necessary in part due to Facebook’s own policy of filtering its users’ news feeds to prevent most posts from getting through. Facebook’s official claim is that only 16% of posts get seen by users.

Sponsored posts are the easiest way to advertise on Facebook but will not necessarily be the most effective unless you have a very compelling post to start with — and a ‘call to action’ that encourages viewers to take a specific action such as visiting your Amazon book sales page.

These simple ads comprise a short headline, some brief copy and a small image. They run down the side of Facebook Pages and Profiles. For book marketing, these ads tend to get the best results but are a bit more complicated to set up.

A unique feature allows Facebook to add pictures of your friends to the ad based on who Likes the Page or product advertised. Facebook calls these ‘social ads’ and claims they are more effective because of the implied recommendation from friends.

Try before you buy

You can make mock-ups of your ads and see how they’ll look when they run — without having to use your live Page — by using the Facebook Demo Tool (http://www.facebook.com/FacebookStudio/app_252363594842548).

Facebook provides an online self-service system to buy and manage your ad campaigns.

Once you’ve set up an ad campaign, Facebook provides a Reports Manager to let you track and analyse ad performance based on a number of metrics.

These reports are specific to your Facebook ads and sponsored stories. To get reports on your Page such as Likes, number of people seeing your posts, etc., use the Facebook Insights tool that we learned about in the earlier section on promoting your Facebook Page.

Facebook is a goldmine of information about who Likes you, what their interests are, and what works. When you log into your Page, you’ll see the Insights link on the left hand side. Insights is Facebook’s analysis tool which profiles your Page fans, their age, gender, where they’re from, what they’ve viewed, and so on.

There are numerous analysis tools available from third parties, too, so if you’re a data junkie, you’ll be well served but Facebook’s free stats are a great resource. It’s not entirely altruistic on Facebook’s part. From Insight, you’re just a click away to creating and running a Facebook ad campaign to give your Page a lift.

You’ll be taken to your Page’s Insights which looks like this: 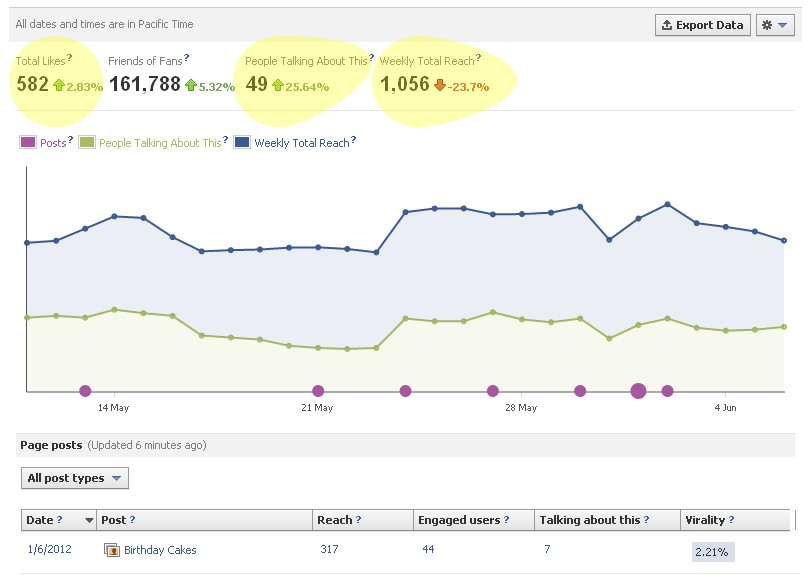 You’ll notice there are three key numbers that are tracked and charted, both overall and for each post on your Page:

If your efforts are successful, your reach should be greater than your actual number of fans: you ought to be seeing people talking about you and this extending well beyond your own fan network.

Of course, if things aren’t going as well as you’d like, Facebook has an answer to that too: Advertise. You can do that from within the Insights tab.

Examples of advertising on other social networks

Facebook is the main show in town as far as social media advertising for books goes (and, indeed, for online advertising of books in general). But there are other opportunities that will be worth considering, especially if they represent networks your potential readers are very active on.

Twitter offers several products, each of which works with widely-used features of Twitter, but is clearly marked as advertising to avoid confusion and maintain the integrity of the network (https://business.twitter.com/en/advertise/). Examples are:

Promoted Tweets. These are ordinary tweets you make from your account but you can pay to have them ‘promoted’. Twitter will feature them in your followers’ news streams (‘timelines’) so they’re less likely to miss them, and will distribute them beyond your own followers. 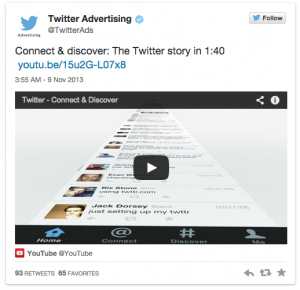 Twitter Cards. Twitter has introduced its own version of an online display ads which they call Cards. Cards appear in a user’s stream of Tweets and have a headline, image (or video) and brief text with call to action. Cards will typically link back to your website. Like its rivals, Twitter offers pricing based on pay-per-click and extensive analytics to track your campaigns’ success.

Promoted Trends. Trending topics list the top #hashtags and topics being talked about on Twitter and are shown to users on their home pages. Promoted trends let advertisers promote a topic to generate discussion. Again, they’re marked as advertising to separate them from the user-generated trends but have a prominent location on users’ Twitter pages. 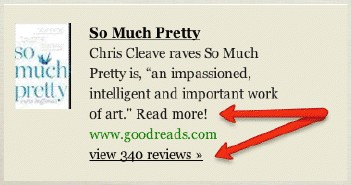 Goodreads is a dedicated social network for book lovers so its audience of more than 10 million is well-targeted.

Its advertising products are specifically designed for selling books with features such as links to Goodreads reviews or giveaway offers (currently ebooks aren’t accepted for giveaways but check for a policy change).

Small budget advertisers can use its online self-service system where they bid on a cost per click basis. The ads are short and simple with a small image, headline, a few words of copy and a call-to-action link.

Advertisers with a bigger budget can contact Goodreads directly for customized packages such as book launch programs (http://www.goodreads.com/advertisers).